1963 - 1968:
Jeff is born and reared in a music-loving family and is exposed to a wide
variety of rock and roll, jazz and classical music. Chuck Berry and
Lester Young are staples. Jeff's first favorite band is The Beatles.

1969 - 1974:
Jeff studies solo piano with Evelyn Schraum. Today's four - year - old virtuosos may be
playing Liszt Etudes by the age Jeff first pecked out "The Speedboat", but in those days,
six years old was considered a pretty decent head start on a career. Jeff's appreciation of melody,
harmony and rhythm, and his abiding passion for performance stem directly from those early lessons.
Despite the guitar artwork plastered all over his website, to this day Jeff remains a pianist at heart.

(As an amusing exercise, say "Jeff is a pianist" aloud five times fast, and you
may reach another conclusion shared by many of those who know him.)

1976 - 1979:
Jeff plays alto & tenor sax in high school band and jazz ensemble.
Jeff starts writing songs, although the results of those efforts are
(mercifully) forgotten. Sometime in 1976 or 1977, Jeff teaches
himself to play guitar (although some guitarists with formal training
would contend that to this day he still doesn't really know how).

1978:
Jeff writes "I Don't Like Your Face" on acoustic guitar while his brother Jim, a budding percussionist,
accompanies him on snare and cymbal. If there's ever a "Backstory Unplugged" album, that'll be Track #1.

1979:
In his freshman year of college, Jeff carpools with a guy who listens to nothing but Black Sabbath. Now, although by this time
Jeff has already written a hardcore punk song on a lark, he is predominantly into "art rock" (Queen and Pink Floyd are favorites),
and the more technique - oriented of the proto - metal bands like Deep Purple, Van Halen and Aerosmith. If you've only heard their
recent material and find it hard to believe that Van Halen or Aerosmith were ever even remotely metal, go buy Van Halen's first
album and Aerosmith's "Draw the Line" right now, and then listen to them. The website will still be here when you get back.

Anyway, for the first couple weeks, the Sabbath treatment is torture. Then, suddenly, it clicks. Refusing to use the same
chords in the same order they've been used by everybody since Beethoven isn't noise if you do it on purpose. It's innovation!
And not to be blessed with an operatic voice doesn't invalidate your technique if you're hitting the notes. Brilliant!
This opens Jeff's mind to entire realms of alternative music that he previously labeled as counterculture, shock-value trash.


1980:
Jeff changes his college major from physics to music, studies applied piano and theory/composition, and
plays tenor sax in concert band and jazz ensemble. The same year, playing keyboards and bass synthesizer,
Jeff joins guitarist/lead vocalist Jim House, guitarist Paul Rexrode and percussionist Bill Coakley to form
The Robots, and Jeff pens "I'm Not Dead Yet" for the band. The Robots also play an electric version of
"I Don't Like Your Face" (recreations of both songs can be heard on Backstory), plus an original by Jim
called "Who Really Cares", an original by Paul called "I'm So Pretty (Pretty Pretty Vacant)" and a mixture
of New Wave and Punk covers. The band's signature gimmick of pelting the audience with Hostess
Twinkies proves to be surprisingly popular.

1982:
Jeff changes his major from music to computer science and joins The Klap. The Klap features lead vocalist/bassist John Pioli,
lead guitarist Mitsuhiro Kondo and percussionist Mike Wiley. The band plays an eclectic blend of college bar rock (in the good ol' days when
the legal drinking age was 18), and becomes one of hottest bands in town. Their flyer states "Everything from Black Sabbath to the B52s".
Jeff plays keyboards (on Planet Claire, et al.) and guitar (on Sweet Leaf, et al.) and steps to the mic on a few songs in his singing debut
(although most formally trained vocalists would contend that to this day he still doesn't really know how).

1983:
The Klap disbands as the other members graduate on a normal four - year schedule, while Jeff is on the six - year plan.

1984 - 1986:
Jeff eventually graduates and begins his "day job" career. Public performance takes a back seat, although Jeff continues to noodle and compose.
At this time, Jeff buys an Amiga computer and begins fooling around with sampling, sequencers and MIDI. Don't laugh - the Amiga kicked
the IBM PC's stodgy butt up and down the block. It had built in digital sound, hi - res 256 - color graphics (when CGA was state
of the art and VGA wasn't yet a twinkle in an engineer's eye), and a graphical, multitasking operating system years before MS Windows would
be developed (and about 15 years before it would become reliable enough to actually use in a recording studio).

Anyway, about half the songs on Backstory were written in this period.

Also sometime in this period, Jeff hears Emerson, Lake and Palmer's arrangement of Ginastera's
1st Piano Sonata, and realizes 20th Century piano composers are actually pretty cool.
Well, no use crying over spilt milk. Plus, designing software is turning out to be a blast. 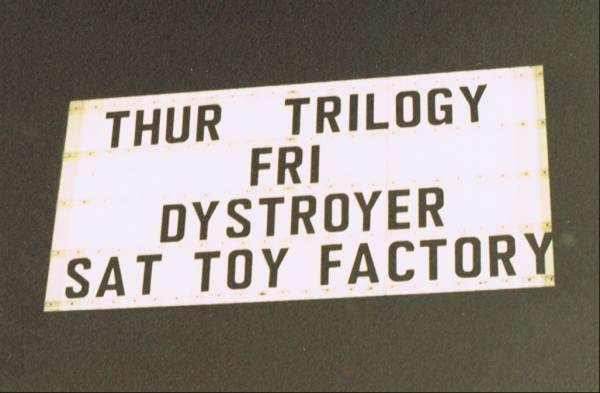 1987:
Jeff, in the role of lead singer and rhythm guitarist, co-founds Dystroyer with percussionist Jim Buser and lead guitarist
Mark Roy. Dystroyer is to bassists what Spinal Tap is to drummers, going through three or four in the year they are together.
(Toward the end, Jeff switches from rhythm guitar to bass and the band performs as a three - piece ensemble thereafter).
Jeff and Mark co-write "Thunderchild", the band's only original, a song that is still infamous among those who heard it for
containing what came to be called "The Thunderchild Note": a blood-curdling falsetto high B that Jeff can't even approach now.
But, uh, he hasn't talked to Mark in years, and it's the potential copyright issues that made him omit that song from Backstory. Really.

Distroyr plays metal exclusively, and are so into it that to them, Van Halen sounds like Top 40 (which in those days, they weren't quite yet).
This leads to Jeff's first bad experience with a venue. The bar in question draws a rock crowd, and management's cursory glance at the set
list leads them to believe Dystroyer would go over well. The band tailors the list to the lighter side of their repertoire. After two sets
of Van Halen, Ratt, Aerosmith, and so forth, the band is asked to lighten it up a bit. Jeff overreacts, rearranging the last set to include
Maiden, Megadeth, Metal Church, Metallica, Anthrax, Death Angel, and so forth. The band is not asked back. Although they have limited
success at a few all-ages shows and the like, their material is generally unsuited for the broader bar scene and they disband soon thereafter.

1988:
Jeff joins Bounty Hunter, a southern rock band, playing keys and rhythm guitar (and the occasional
sax solo just to show off), and sharing singing duties with lead guitarist Jim Kinneman. Jeff has a great time (and
singing Molly Hatchet is a hoot), but mounting schedule pressure from the "day job" contributes to the band's demise.

1989 - 1990:
The company Jeff works for wins numerous "Editor's Choice" awards from the trade press for software
he develops. He insists we mention this to demonstrate that his constant whining about his "day job"
doesn't reflect regret about his career choices and isn't used as a convenient excuse for not being
more commercially successful as a musician, but is intended to amaze us that he finds time to play at all.
We tell you all this now because Jeff will only authorize this biography on the condition that we do so.

Um, at any rate, during this time Jeff continues to hone his skill with samplers, sequencers, and
computer - based composition and recording. Early experiments with microtonal composition are
promising, but it's really a combination of 8-bit sampling, MIDI sequencing and 4-track recording
to render primitive versions of Absalom and the avant - garde "Sorry Dave" (based on a sample from
"2001: A Space Odyssey") that tickle Jeff's fancy. Unfortunately, both recordings are now lost, and the
microtonal composition ideas are still awaiting software that will support a full exploration of their possibilities.
Hmmm.... there's a thought. Chop, chop, software boy! 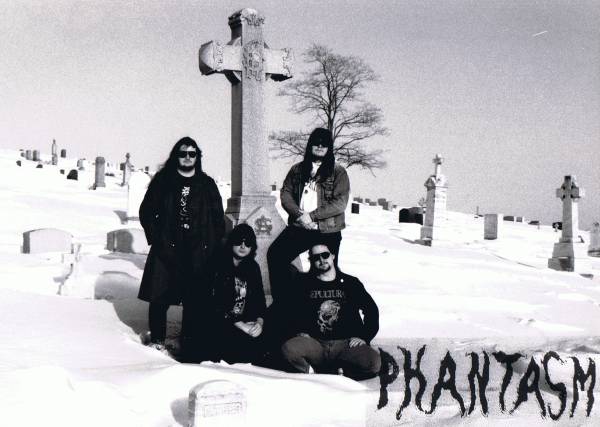 1991 - 1993:
The "progressive gothic metal" band Phantasm is growing tired of performing as a three-piece ensemble. Jeff's brother Jim
is the percussionist, and despite his advice to the contrary (he is skeptical that Jeff's chops are up to the task, and he knows
what a pain in the neck Jeff can be), the band hires Jeff as rhythm guitarist. As it turns out, Jim's skepticism is well - founded
(Jeff is heard to remark on numerous occasions while learning the material, "that's not a rhythm part - that's a lead "), but
between lead guitarist Tim Wilhelm's tutelage and the band's general insistence on precision, Jeff's guitar technique improves
by leaps and bounds, and he ends up an adequate guitarist. Phantasm plays a couple of years and releases From the Attic,
but a combination of geographical challenges, the inevitable "day job" pressure, and a lack of commercial success spell doom.

1994 - 1998:
Tired of working 60 - hour weeks to enrich his employer, Jeff starts a consulting company. Now he works
60 - hour weeks to enrich himself. Public performance again takes a back seat to the "day job". Plus, by now metal
is quiescent, the grunge scene is in full swing, and while meaning no offense to grunge bands, once you've been paid to
to play "Egyptian Tales" (even if the payment barely covered the bar tab), playing Pearl Jam just doesn't seem as exciting.

1999 - 2002:
Amidst a resurgence of metal in radio and video rotation, Jeff reunites with Phantasm alumni Tim Wilhelm, Jim Buser and
Tim Vanhouten (Phantasm's original bass player before Dave Calhoun) to form Jaw. The band plays a mix of metal and
heavier alternative tunes, and slowly builds a following. Interestingly, playing plenty of good stuff like System of a Down,
Godsmack, Korn, et al. makes throwing some grunge into the mix kind of fun. In fact, the main guitar part from Nirvana's
"Breed" is right up there with "Smoke on the Water", "You Really Got Me" and "Cat Scratch Fever" as a riff that is just sheer
joy to play. However, when Jaw breaks up in early 2002, Jeff vows never to play live again, and dedicates himself to recording.

December 2003:
Jeff attempts to fire the content writer responsible for the sarcastic "1989 - 1990" section of his
biography, until he realizes he has simply gotten carried away with the third - person narrative style.

July 2005 - Present:
Jeff again reunites with former Phantasm bandmates Tim Wilhelm and Jim Buser for a side project called Iridium.
They release a number of singles on an intermittent schedule and are still collaborating. Songs to date include:
All Fall Down (December 2005),Ashes to Ashes (June 2006), Psycho Path (January 2007),
One Track Mind (September 2007), Alter Ego (August 2008), and Backs to the Wall (May 2009)

October 2008:
Jeff begins working on his first solo project since 2004,
"Rise and Fall of Alexander", a concept album
based on the life of Alexander the Great.

June 2011:
Foxwood releases "Rise of Alexander", the first disc of
a two-disc set based on the life of Alexander the Great,
and starts work on Disc 2, "Fall of Alexander".