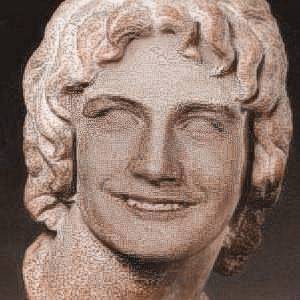 The working title at one time was "Legacy of Alexander",
but in October 2010, I decided I didn't really like it.
I may yet do a sequel to Legacy of Alexander, Part I from the album
The Traveler, but this album turned out to be less about Alexander's
legacy, and more of a biographical drama, hence the name change.


All music and lyrics by Jeff Buser

All instrumental performances and vocals by Jeff Buser except:

The part of Olympias on Conspiracy sung by Tanya Rice.

Running time is way over 75 minutes, the maximum length of a standard CD.
I was agonizing over what to cut when I realized two CDs would be perfect.

The first half of the story is a rising curve, culminating with Alexander's final
defeat of Darius at the Battle of Gaugamela. It's a predominantly happy story
with a few challenges and setbacks that make the climax satisfying (plus a little
bit of a cliffhanger). The second half is a downward spiral, pretty much one
big bummer with a few high points to relieve the tension. I had previously set
some musical and lyrical direction for the album based on a subconscious
understanding of that balance, but the 2-CD idea really crystallized it for me.

For starters, the artwork can incorporate the classical Greek comedy & tragedy
masks on the first and second discs respsectively. There's a certain yin yang
aspect to it as well, a symbol I've always found personally compelling.

All that gives a sense of symmetry to the total work, which I think is
quite appropriate for a subject who studied logic and philosophy with
Aristotle and greatly admired Egyptian culture (which itself had a great
fascination with symmetry). Which brought me to a decision about how
to release two CDs. One package, a la Pink Floyd's "The Wall", or two
separate, linked CDs a la System of a Down's "Mesmerize/Hypnotize"?

That decision was completely pragmatic. First, two single jewel cases
are cheaper than one double CD case. Second, the songs on Disc 1
are done. The songs for Disc 2 aren't. No need to keep the fans waiting.
And finally, if you're the sort of person who only likes happy endings
(or unhappy ones), you only need to buy the disc that fits your mood.

Legacy of Alexander, Part II is being recorded direct to digital on a MacBook Pro
using an Edirol UA-1000 audio interface and Logic Studio recording software.