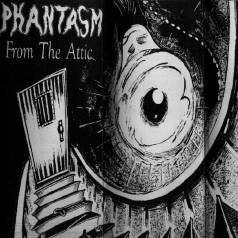 Phantasm was a self-described "progressive gothic metal" band in the early 1990's. "Gothic" referred predominantly to their lyrical inclination toward themes of horror, and not so much to the musical style charactarized by bands like Type O Negative.

From the Attic is Phantasm's only CD. Phantasm was:

All songs arranged by Phantasm.

Recorded September 1991 and May 1992 at Synctrackz Studios in Burke, VA